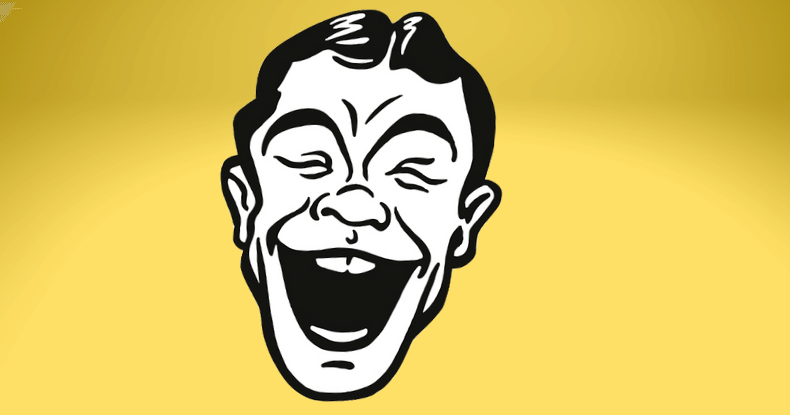 No instrument is better for funny comedy songs and novelty songs than the ukulele. There’s something about it’s happy-go-lucky charm that makes funny songs feel funnier.

As a dandy bonus, comedy songs for ukulele tend to be pretty simple for chords and strumming, which means you can focus on your delivery and laugh-getting.

When it comes to funny ukulele songs…

…your mind might very well jump to the likes of George Formby, who was famous for his jaunty uke style, and his rather racy comedy songs on ukulele.

For zample, this is probably Formby’s most famous comedy song, “When I’m Cleaning Windows.”

(Need the ukulele tab and chords for “When I’m Cleaning Windows”? Here you go!)

Thanks to the likes of Formby and his ilk, the uke garnered a reputation as a mere accessory for comedians. So much so that the American Federation of Musicians refused to accept the uke as anything but a ‘novelty contraption’.

Times change, though, and whilst the uke went on to prove its staying power as a serious musical instrument there is still plenty of room for funny ukulele songs and novelty songs — and here’s where to find ’em!

‘Funny Sings for the Ukulele’

Compiled by Franz Yahn, this music book published in 1920 is available a free pdf download using this link. Featuring traditional tracks such as ‘I’m Getting to Be a Big Boy Now’, ‘Down Went the Captain’ and ‘Oh Vere iss Mine Leedle Tog Gone’ the tracks include uke tabs, chords and lyrics.

Known for his black humour, satirist Lehrer was a prolific singer/songwriter and his back catalogue of songs is available for the ukulele via a number of sites, including Ultimate Guitar. Classic tracks such as ‘Poisoning Pigeons in the Park’ and parodies of other popular songs will appeal to different tastes. He is, perhaps, best known for setting the chemical elements to the tune of the ‘Modern Major Major General’.

In the comedy section of this useful website you will find some tabs for some wonderfully funny and obscure songs by Flight of the Conchords, Sarah Silverman, Frank Skinner and Half Man Half Biscuit.

Available as a free download this book from the 1920’s features music made popular by Cliff Edwards (better known as Ukulele Ike). All arranged specifically for the ukulele, selections range from the sublime to the ridiculous.

Though these songs have been compiled for children there are some funny songs in here that sound great on the ukulele. Classic tracks like ’40 years on an Iceberg’, ‘I Stuck my Head in a little Skunk’s Hole’ and ‘My Name is Joe’ will bring back memories of campfire fun.

This library of novelty songs covers a huge range of comedy tracks from traditional ballads to TV themes. ‘Ode de Toilet’, ‘I’ll Never Forget the Day I Read a Book’ and ‘You Always Hurt the Ribs You Love’ deserve a special mention.

Some of the tunes listed in these resources are a little obscure but a quick YouTube search will dredge up even the most forgotten ukulele comedy songs.

What a strange site this is. It’s a HUGE compilation of comedy and novelty songs, but only some have chords, and the whole thing feels like it’s a front from something else. Still, it might be worth taking a look here, if all else fails.

Good news! Danno’s hand-compiled 50-song songbook jam-packed with comedy and novelty songs is available for free, and is a great way to front-load your comedy song set. You won’t find “On Top of Spaghetti” here — these are true classics of the comedy song genre, that get big laughs, but also sound great.